lues & Legends Hall of Fame Museum tells three distinct stories all interwoven into a singe tale of the blues.  One store tells the tale of  almost 20 individual Blues Legends.  Unique talented entertainers who shaped the blues, each in his or her way.  The second story is the history of the blues sometimes told from the vision of a city or an distincitve georgraphic area.  The third story is about the instruments and radio stations.

The Museum, which opened in May 1998, was the largest and most comprehensive Blues Museum in the world for 9 years thanks to the vision of its founder, David Simmons, and the financial support of Jack Binion and the Horseshoe Casino.  Part of the museum exhibits were donated to the Delta Blues Museum in Clarksdale, some of the items and George Hunt paintings anchor the "Gateway to the Blues" exhibit in the historic Tutwiler Train Station now located next to the Tunica Visitors Center on Highway 61, and some items remain in Simmons collection as we look for a new partner and a new location for Blues & Legends Hall of Fame Museum.

In the meantime, enjoy the beginning of a virtual tour of Blues & Legends Hall of Fame Museum.

Blues & Legends Hall of Fame Museum and Design is a trademark 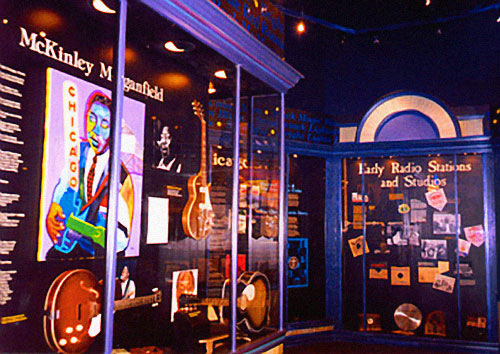